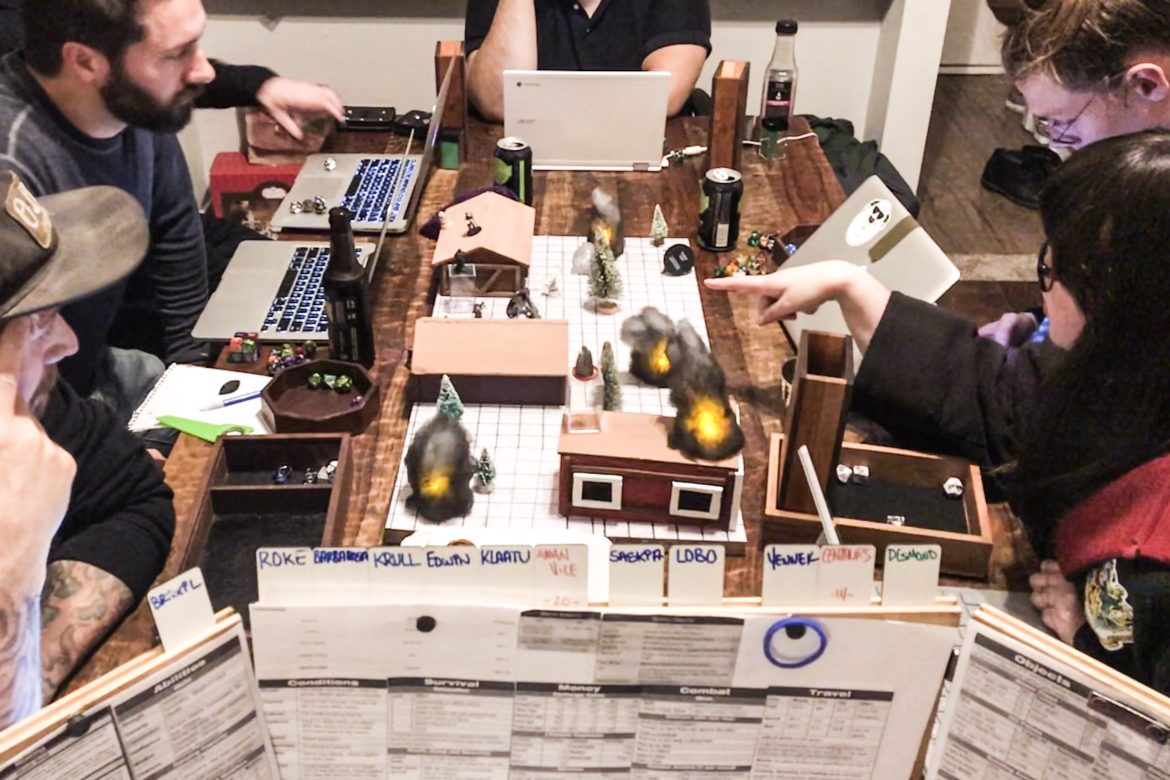 A Beginner’s Travel Guide into The World of Dungeons & Dragons

It’s a brisk Autumn night as you walk down a narrow dirt road. The bright full moon lights your path, while the smell of rain lingers on the earth from the passing storm. In the distance you see a faint glow through the trees and can hear lively music, people laughing and cheering. You round the corner to find your destination, The Storm Crow Tavern. You see shadows of people passing the windows from inside, smoke rising into the night from the chimneys above, and a few horses tied to the post, slowly eating the feed in front of them.

As you enter you’re immediately overwhelmed with the joyous energy that fills the room. Taking a seat at a corner table you observe the patrons in the room. You see a petite female Elf with red hair playing a drinking game with a male Orc, she seems to be winning. At a round table in the middle you see a blue Tiefling girl drawing three cards from a small female Goblin. Cheers roar when two male Halflings hop on a table to dance and sing. That’s when you notice a cloaked figure heading straight for you with intent. Do I have your attention now?

Dungeons & Dragons was created from the love of miniature wargaming. Gary Gygax being fascinated by the way the dice affected the game built his love into something more with fellow players and friends. In 1973 Gary and Don Kaye formed Tactical Studies Rules (TSR) and in 1974 they published
“Dungeons & Dragons: Rules for Fantastic Medieval Wargame Campaigns, Playable with Paper and Pencil and Miniature Figures” designed by Gary and Dave Arneson. The rest is a role in history, to read a fascinating interview with Gary Gygax visit Here

Now it’s time to play some Dungeons & Dragons! You’ll need to build your character or you can randomly generate one on D&D Beyond.

You may be starting a campaign with a group of people or joining an existing one. There’s also many options when it comes to playing. You may choose to be a limited member and only “guest star” for a few sessions in an existing campaign. There’s also one shots, which is a contained story that only lasts a day or so.
If you’re interested in playing but don’t know where to start check with your local game store or use the internet to look for a D&D Adventures League and this Reddit chat.

Maybe you’re not ready to start playing at all, which is totally fine. There are plenty of gaming streams to watch out there. An incredibly popular stream is Critical Role, where a bunch of nerdy voice actors take on the adventures of D&D. They also put out some really helpful videos to help you navigate D&D called Handbooker Helper

Nerd Wood Designs – A good friend, who runs his own small nerdy business. Inspired by our campaign, he started making table top gaming accessories. You’ll catch me and a few other working his booth from time to time.

Research – Our Dungeon Master / my hubs has created helpful videos to build some awesome characters using D&D Beyond on his channel, DweebQuest.

Most importantly, have fun! It’s a game after all.